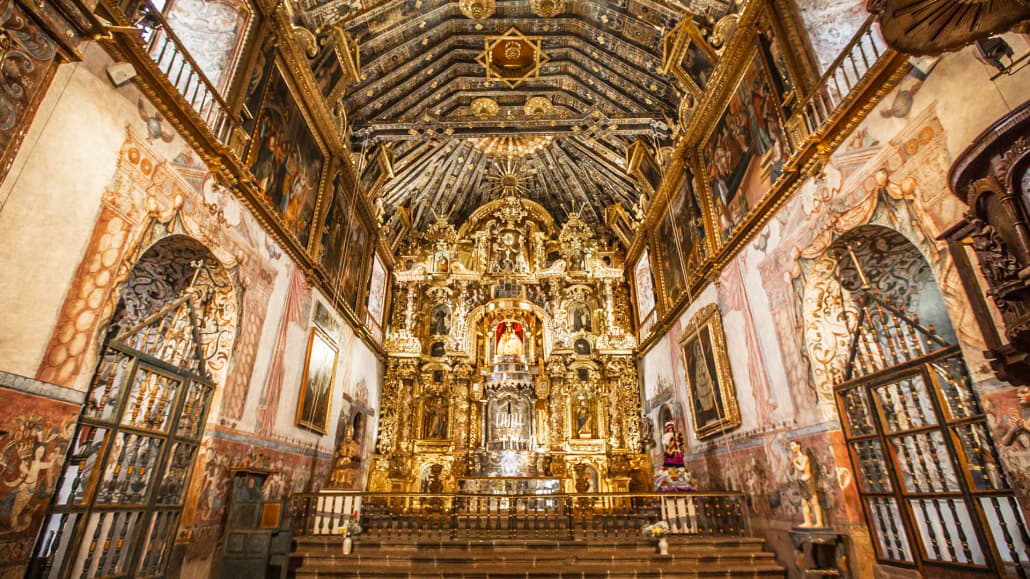 The South Valley from Cusco is a half-day tour that takes us to the Sistine Chapel of America, an exquisite construction of colonial architecture. Tipon, with its system of agricultural terraces irrigated by a network of natural spring channels; and Pikillaqta, the great pre-Inca city of the Wari culture.

Very close to the route of the famous Rainbow Mountain, in the South of the Cusco Valley, there are important archaeological sites of the ancient Pre Inca culture; like Tipon, Pikillacta and the beautiful Sistine Chapel of America in the colonial-style town of Andahuaylillas.

Half day tours. The first group’s departure is at 09:00 AM and the second is at 01:00 PM. Pick whichever time slot that works best for you. We will pick you up from the hotel at your desired time and drive through the South of Cusco. We will first arrive at Tipon; the most impressive ancient water hydraulic system and outstanding views.

Then we will continue to Pikillaqta which is pre Inka architecture reminds us how they used to build and live. Afterwards enjoy Andahuaylillas, the Sistine Chapel of America. Last, we will return to Cusco and finish the tour at your hotel.

This austere exterior appearance gives a 180º turn with which it unfolds, as soon as the temple doors are crossed. An explosion of gold and carvings and paintings “scares”, so would say who had entered there in the seventeenth century, using the word in its meaning at the time: “marvel”, “amaze to the limit”, the visitor, because the decoration in Gold leaf and murals, leaves almost no free space.

The church of San Pedro Apóstol de Andahuaylillas must have been built at the end of the 16th century, as one of its murals, signed by Luis de Riaño, is dated 1626. These mural paintings were commissioned by who was then the pastor, Juan Pérez Bocanegra, author of the Hanacpachap cussicuinin (Hanaq Pachap Kusikuynin = Joy of Heaven), the first vocal polyphonic work composed throughout the Americas, with mostly written Quechua lyrics. It is a temple consecrated under the invocation of San Pedro, although the main altar is presided by the Virgin of the Rosary. The Jesuits were in charge in the period 1628-1636. It consists of a single ship with side chapels. Its wide walls are made of mud.

Tipón, is a sprawling early 15th-century Inca construction is situated at 3,400 meters above sea level. The complex covers 239 hectares and is located 22 kilometers southeast of Cusco near the town of Tipón. It consists of wide agricultural terraces irrigated by a network of water channels fed by a natural spring. Several surrounding ruins have been excavated, and many more are visible below the soil.

The Tipón complex is located near Oropesa in the Community of Choquepeda, southeast of Cusco and along the Cusco-Puno road. It contains enclosures, terraces and an intact canal. The upper complex is crossed by the Inca Trail with an irrigation canal. It was put on the List of Historic Civil Engineering Landmarks.

The site was probably used as a laboratory of agricultural products because of the various micro-climates found within the complex. Tipon is considered one of the 16 most important archaeological tours for tourists who visit the area.

Besides being an archaeological complex, the site is home to one of the largest irrigation works in the terraces, with a great distribution of outdoor water channels.

Pikillaqta is a village of the Wari people. Wari was the centre village and other cities like Pikillaqta were influenced by it. The Wari also inhabited many other sites around the area. The site was occupied from about 550 to 1100 AD. Its main use was for ceremonies and the site was not complete when it was abandoned.

The Pikillaqta site is located in low ridges in the eastern Valley of Cuzco. (McEwan 2005:29) The area is hilly with no rivers, but small lakes are located near the city. The area is grassy, rocky, and sandy where the buildings were built.

The site is 3,250 meters above sea level and is in the Lucre Basin. The climate in the area of Pikillaqta is cold and dry. Mid April through October is the dry season. November starts the wet season and the weather is milder and that goes until mid April. The average temperature high is in the 60s (probably Fahrenheit… so around 15 °C), and the average temperature low is in the 30s and 40s (also, possibly, Fahrenheit, that is, 0 to 5 °C) year round in the Valley of Cusco. The rainfall averages 300 mm a month in the wet season and 106 mm a month in the dry season.

What you’ll need to bring and carry

Machu Picchu Facts during the time since Machu Picchu Peru was discovered scientifically by Hiram Bingham the world witness the discovery of one of the most amazing Inca citadel named Machu Picchu, after many years working to excavate at every single sector we haven’t finish yet. We keep on learning every day about when? How? And who did it, now a days evidences are showing about the amount of people living to build a developed place an royal society and the main reason why Machu Picchu was built located in the most remote area of the Peruvian Andes.

Machu Picchu travel had started with the first tours taken by Hiram Bingham until now a days most Machu Picchu Tours are offer for everyone who is coming to visit Machu Picchu citadel, Machu Picchu Mountain Huayna Picchu or Sun Gate, Machu Picchu is Located in the cloud forest between the Amazon and the Andes highlands, the only way to get there during the Inca Period was the worlds famous Inca Trail or well known as Inca Trail To Machu Picchu 4 days 3 nights, the fourth day early morning hike to see the first and the most impressive scenery of Machu Picchu the famous Machu Picchu Sun Gate.

From the Amazon to the Andes

The Treasure of the Incas

Rainbow Mountain in Vinicunca – Mountain of Seven Colors in Perú