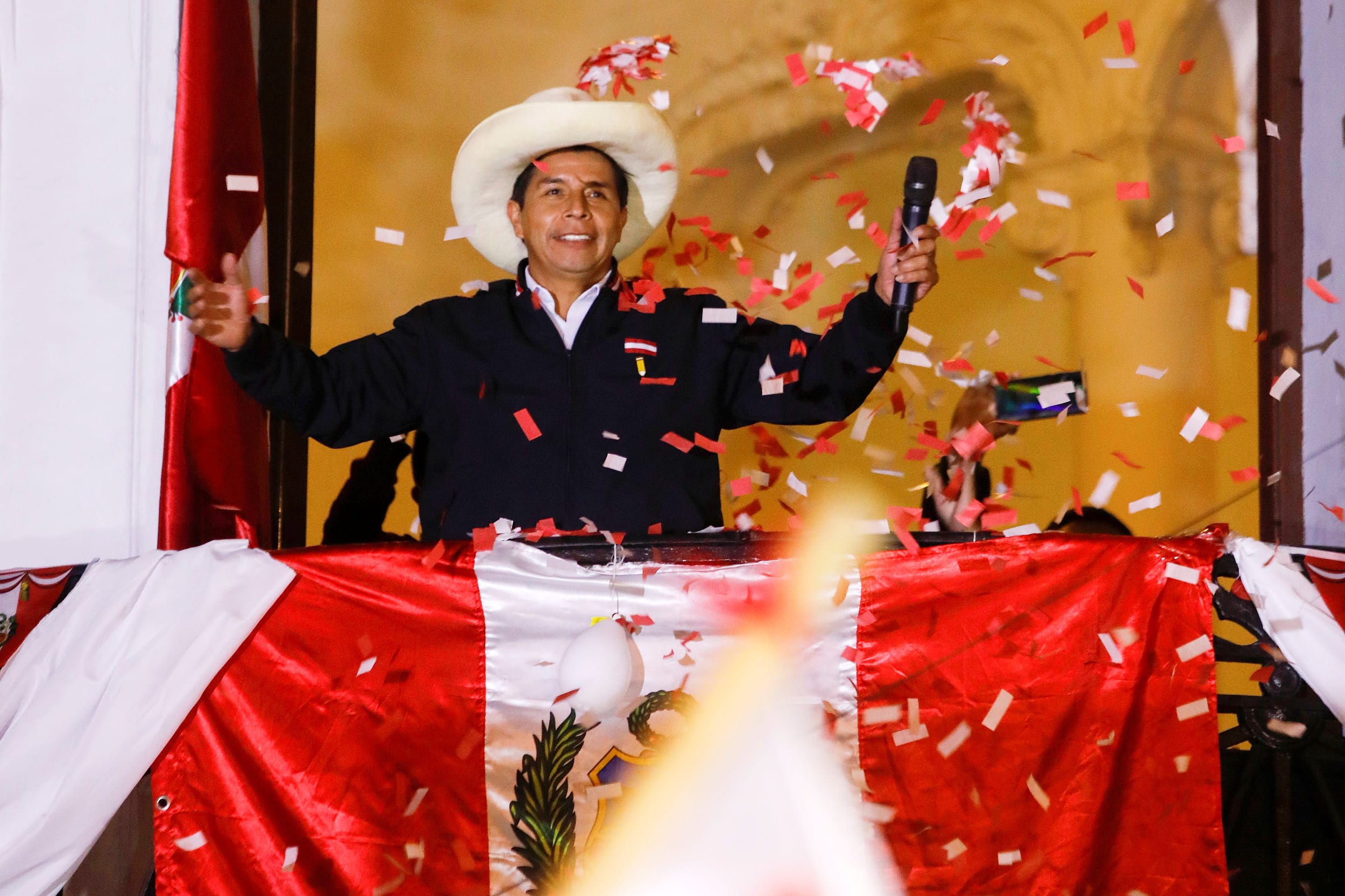 Jose Pedro Castillo Terrones Leftist Political outsider wins Peru presidency Mr. Castillo, who vowed to overhaul the political and economic system to address poverty and inequality, narrowly defeated the daughter of Alberto Fujimori, the jailed former president. His parents were peasant farmers who never learned to read. As a child, he walked hours to go to school, before becoming a teacher himself. Then two months ago to became one of the voices of the rural areas of Peru by offering to the country new changes and better education, especially the new changes of the constitution looking for the benefits of country, since the first elections started most people look for new options instead been with the rightist for more than 30 years with no changes and more corruption increasing that doesn’t help the country going forward, most voters are from rural areas named the votes of the forgotten people, that caused the division between the right and the left or just simply Lima and the rest of the country caused strikes and madness during the second elections with his expression “No more poor people in a rich country.” encouraging people from rural areas and giving them a new hope of education and better health care.

This past Monday night, no more than a month since the second round of the presidential elections, officials declare Pedro Castillo, 51, the next President of Peru in a very close vote, he defeated Keiko Fujimori, the daughter of a right-wing former president and herself a towering symbol of the Peruvian elite.

Mr. Castillo’s victory, however, narrows the margin, is the clearest repudiation of the country’s establishment in 30 years. it was also the third straight loss for Ms. Fujimori who is processed for corruption and still being investigated for money laundering.

Mr. Castillo, a socialist will become Peru’s first left-wing president in more than a generation, and its first to have lived most of his life as a “Campesino” Farmer in a poor Andean region.

In a victory speech from a balcony in downtown Lima, with his supporters chanting “yes, we could” in the streets below, Mr. Castillo promised to work for all Peruvians.

“I call for the broadest unity of the Peruvian people,” Mr. Castillo said. “Together we’ll share this struggle and this effort to make a more just, dignified, and united Peru.”

The announcement of his victory came after a more than month-long effort by Ms. Fujimori to have about 200,000 votes tossed out in areas where Mr. Castillo won by a landslide, an action that would have disenfranchised many poor and Indigenous Peruvians.

Shortly before authorities declared Mr. Castillo president-elect, Ms. Fujimori said in a televised speech Monday evening that she would acknowledge the results out of respect for the law, but called his pending proclamation as president-elect “illegitimate” and insisted again that his party had stolen thousands of votes from her.

Now the most important entities of Peru are preparing the new investigation they called the most expensive election for Ms. Fujimori with and approximately 30 million soles in total expenses that may be sponsored by big transnational companies that alliance them with the country.